Wherein Bizarro Central features a wide-ranging look at all the weird books coming out this summer….

In an attempt to interview forgotten outsider musician Y. Bhekhirst, Alex, an aspiring rock journalist, travels the backroads of Mexico along with his girlfriend, Primavera, his best friend/drug dealer Larry AKA Lobster, and John, the ghost of a singer trapped in his own record. Along the way they discover towns that disappear overnight, waiters without mouths, cartel bosses with mysterious powers, anarchist militias, and churches which contain infinite worlds.

From Justin Grimbol and Atlatl Press comes a book of poetry about Upstate New York and marriage: Mud Season.

Next, Moses Guttchenridder has several problems. His business, Macramania, is going under. His lovelife is in the toilet. Oh, and he has been forced into helping a murderous garden gnome take his revenge on the brothers of a fraternity who make sport out of destroying garden gnomes. The only spot of good news is that he has been chosen at random to become the new face of Krap-Wad Toilet Paper, replacing their beloved spokesanimal, Tenderbear, who has been arrested for drunk driving. The new head of Krap-Wad, Regan Moribund, falls in love Moses, but their relationship is put immediately in jeopardy when Tenderbear escapes his jail cell and goes on a murderous rampage, killing everyone who crosses his path. The former head of Krap-Wad toilet paper, Giles Moribund, attempts to re-take over the company  by hiring a hitman, Asigao, to kill his daughter, Regan.  When Moses, Regan, Giles, Asiago, the muderous gnome and several others converge on New York City, it becomes a bloody masacre to see who will remain on top of the dangerous toilet paper world. At turns humorous and horrifying, Tenderbear Goes Apeshit is another twisted offering from the mind of Bix Skahill (Babes in Gangland and Dope Tits). Get it here!

And finally, Mother’s Revenge: A Dark and Bizarre Anthology of Global Proportions. What happens when you abuse your mother? It’s not pretty. It’s not nice. And she can get downright mean and nasty if you don’t straighten up and make amends. In this mixed genre group of eco-tales, thirty-two authors from around the globe offer up some lessons in why it’s wise to be kind to Mother Earth. Read and take heed. Your very life may depend on it!

“If you’re looking for an absurdist tour of the vast and dangerous criminal underworld of Fremont, Ohio or a ridiculously laugh out loud portrait of a bizarre small town… then Bix Skahill’s DOPE TITS is the book for you.” Jeremy Robert Johnson, author of SKULLCRACK CITY

“Bix is the tits,” Tiffany Scandal, author of SHIT LUCK and JIGSAW YOUTH 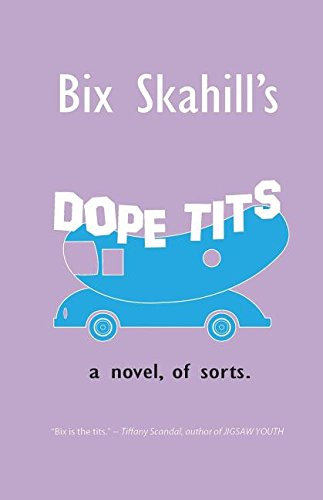 Life is good in Fremont, Ohio. Well, acceptable. If one ignores the fact that Rusty Slump, local ne’er-do-well known for public defecation, and his sometimes girlfriend, CoCo McArdle, have recently dug up the corpse of hometown hero Rutherford B. Hayes with thoughts of ransom. But their hopes are dashed when they realize no one really cares. But then they discover, through sexual hijinks, that if you mix the drug ectasy with the flesh of the dead president’s penis, you get one hell of a high. They dub their new drug Purple Hayes and attempt to take over Fremont’s vast and dangerous criminal underworld. Unfortuatenly, although Hayes’ penis meat is prodigious, it can only last so long and soon the highly addictive drug disappears from the streets of Fremont.

This is good news for the Fremont Police Society, as the town is about to host their annual celebration, Hayes Dayes. But something more dangerous than Purple Hayes is coming to town.

A demon, Maude the Layer of Waste, has escaped the confines of hell, bent on destroying all mankind. She inhabits the body of the recently dead Connie Pendleton, a virginal teen accidentally killed by Rusty. Maude the Layer of Waste transforms Connie’s body into a curvaceous sex kitten, Dearly Departed, and begins searching Fremont for the perfect mate to help her carry out her plans. She sets her sights on Rusty, but he passes out every time they have sexual congress. The young thug soon realizes the demon’s breasts are psychotropic, just like Hayes’ penis.

Rusty and CoCo have stumbled upon a way to regain their position in the vast and dangerous criminal underworld of Fremont, Ohio, as long as the demon doesn’t end the world first.